Here is (belatedly) the summary of session 55. Following the previous session, I asked my players to decide in advance of the next game, which of the two orc caves they were going to tackle (or whatever else they were going to do instead), so that I would be suitably prepared. I had intended to resolve that during the session, but we had to end rather more abruptly than I had planned.

The goblin advised Hemmu that the first orc cave would be easiest to reach. Getting to the second orc cave held a higher risk of being spotted, either by orc or by kobolds. There was much discussion between the players. Eventually they decided to tackle the first cave.

Due to the coronavirus lockdown, we played remotely rather than in person. I laid out maps and paper minis on the table, and used Hangouts to broadcast a video of the battlefield. A new player joined our virtual table, taking up the mantle of the (regularly returning pregenerated PC) Sir Yvor.


Having agreed between sessions to enter the first orc cave, the party followed their goblin and hobgoblin "guides" across the ravine floor and into a small wood opposite the goblin cave, where they met Llandor and Yvor waiting for them....


The party were lead through the wood by their guides, and up the side of the ravine to the first cave. As the goblin had previously stated, they showed the PCs the entrance to the orc cave, but would not go in themselves, instead retreating back into the relative safety of the wood.

Inside the cave, the party soon came to a junction. The wall opposite contained stone shelves decorated with dead and decaying heads of various humanoid races. While the party was examining this and deciding what to do next, they were attacked from both sides by orc guards, most of which were wielding 2 spears each. Where possible the orcs would throw their first spear, then on their following turn would ready the second spear for 2-handed use. In spite of the pincer attack, the PCs made short work of the orcs.


The fight on two fronts had stretched the party out, and the PCs exacerbated this. My large A3 map sheets didn't discourage that, although I ran out of table and the webcam didn't have the angle to capture it all in one shot. The party ended separated out, as some of the PCs proceeded from the junction into a large hall, while other party members stayed behind in the corridors doing things like checking the for more orcs, collecting arrows, and searching orc bodies.


Seeing that the hall had many tables and benches, with a single large chair at one end, Miao Miao rushed forward and immediately sat in the chair. Other party members also approached the main table. When orcs started lining up at the entrances on the opposite side of the hall, the PCs rushed forward to meet them, not waiting for their trailing party members to catch up.*

With 8 orc males with swords and about a dozen females with bows lining up, the PCs in the hall rushed forward. I think there was a half-hearted attempt at parley from the PCs, but this was cut short when the bloodthirsty elf Llandor ran in at full tilt and shot into the crowd of orcs. A rather one-sided fight broke out, while the party wizard and several of the NPCs weren't even in the hall.

Here is a photo towards the end of the fight, with the orc swordsmen cut down, and the females backing off as they shouted in orcish at Hemmu. The party were here specifically for the orc chief, and it seemed that the females were prepared to back down, if the orc children would be spared. 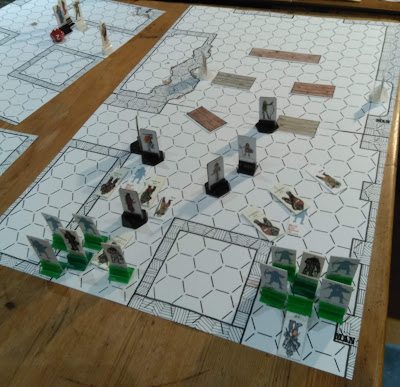 The junction map can be seen in the top left corner of the photo. That sheet connects to the far side of the map (from where the PCs entered the hall). I had to separate them in order to fit all of the orc hall into the webcam. The photo I posted previously shows all three connected together.

We ended it there, with Brother Warian warning Sir Yvor that he could hear something from down the unexplored corridor ahead...


* I drop hints at this sort of thing, but really if players aren't disciplined and just spread out in a disorganised organic mess, then it could come to bite them hard one of these days. It also makes it logistically hard to manage a battlefield of that size, with PCs spread across multiple sheets of battlemap. I don't want to use GM fiat to force the party to stay compact, but neither do I want to give the players a free pass on accidentally splitting the party up without fear of consequence. The enemies shouldn't be expected not to act appropriately just because the result would be inconvenient. 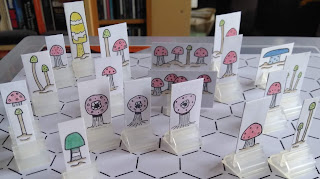 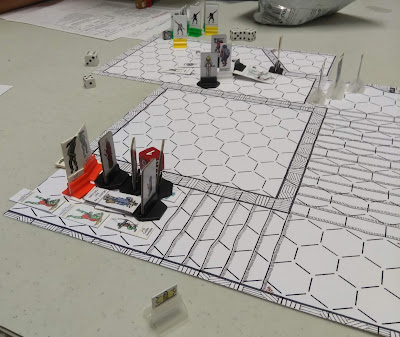